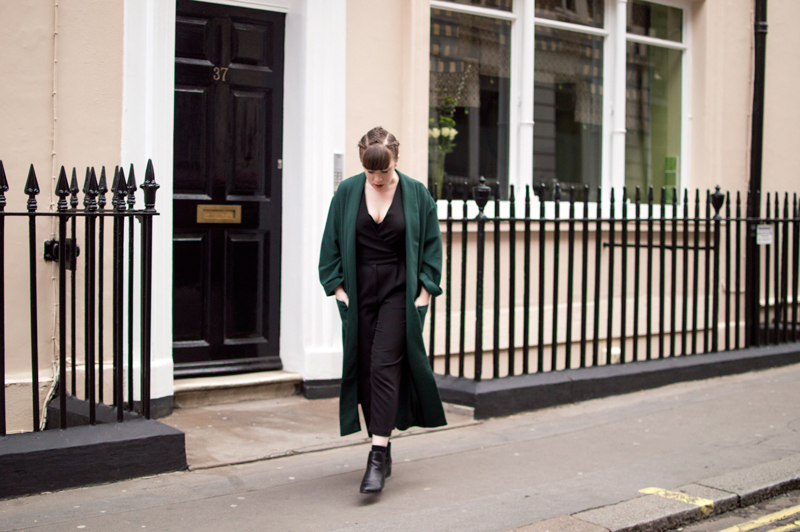 Part of the fun of London Fashion Week is going out in your Sunday best. Dressing up, and seeing if you get papped…snapped…Instagrammed? Photo sharing platforms aside, I genuinely love dressing up, so LFW is a lot of fun for me. I’ve had a couple of photos taken in the past, but I can’t honestly say I’ve turned heads. Not the way I did when I wore this little number, whilst wandering around Soho a couple of weekends ago. Is it the coat? Is it the hair? Is it the daring cleavage I’m flaunting? Who knows!

For such a simple get up, I felt pretty stylish. My trusty Topshop jumpsuit and ASOS boots were the basis for this look, but I couldn’t resist throwing on this (deep emerald green) Urban Outfitters coat when I saw it. The coat had me feeling like a superhero, what with the way it swished as I walked down the street. But maybe my look was more fitting of a super villain with this particular hair style? After all, everyone knows villains are always more stylish…

Check out my previous style posts: OOTD
Thanks to V.A (Chopstickpanorama) for the photos of me. 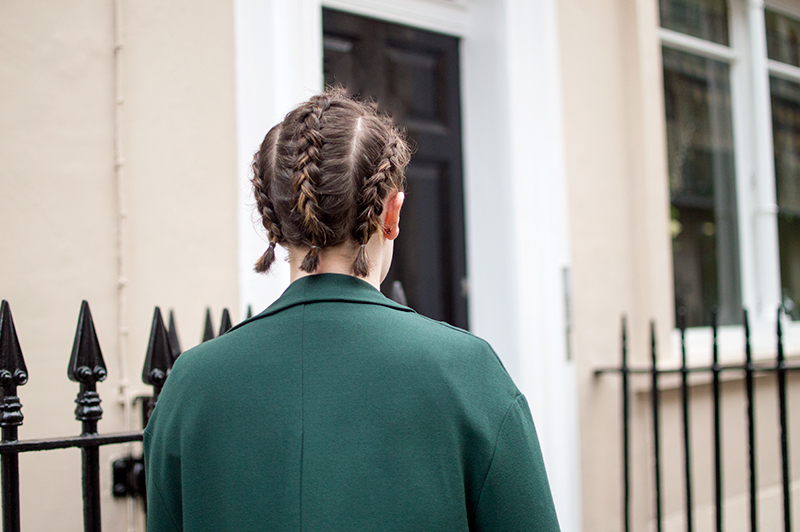 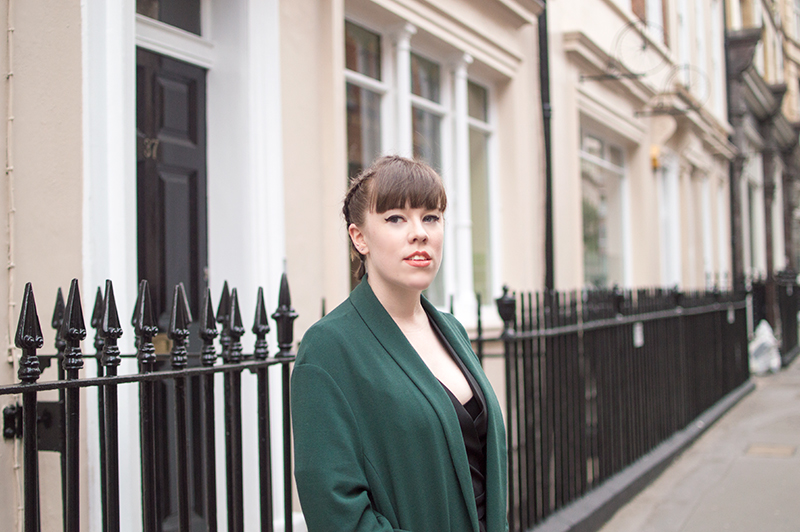 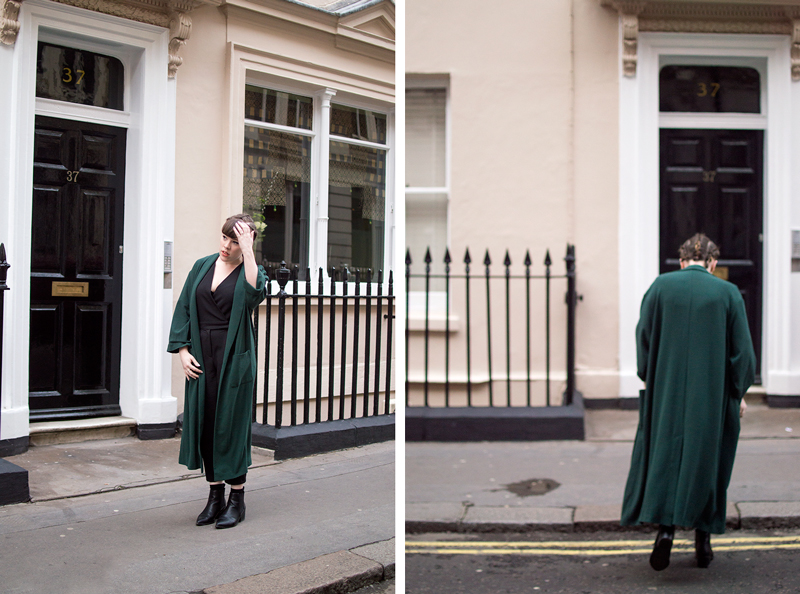 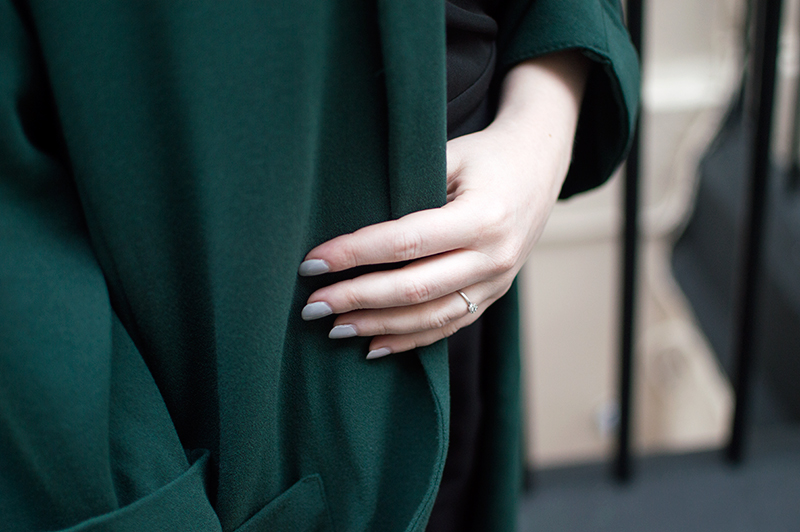 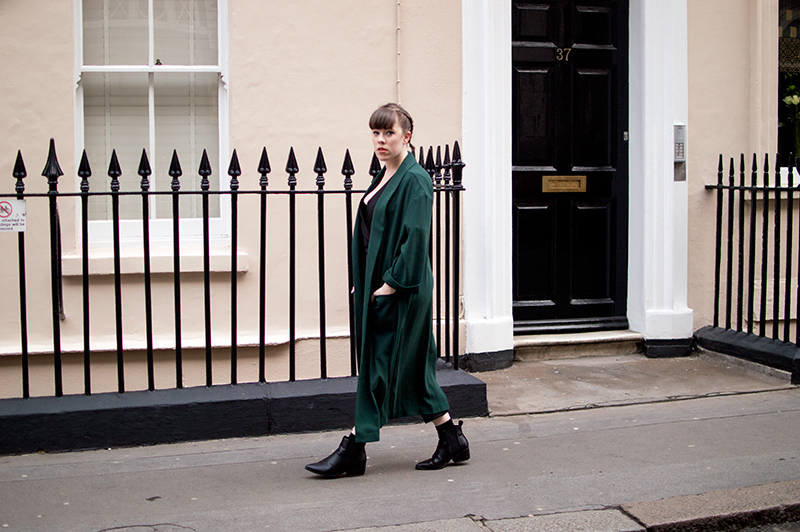 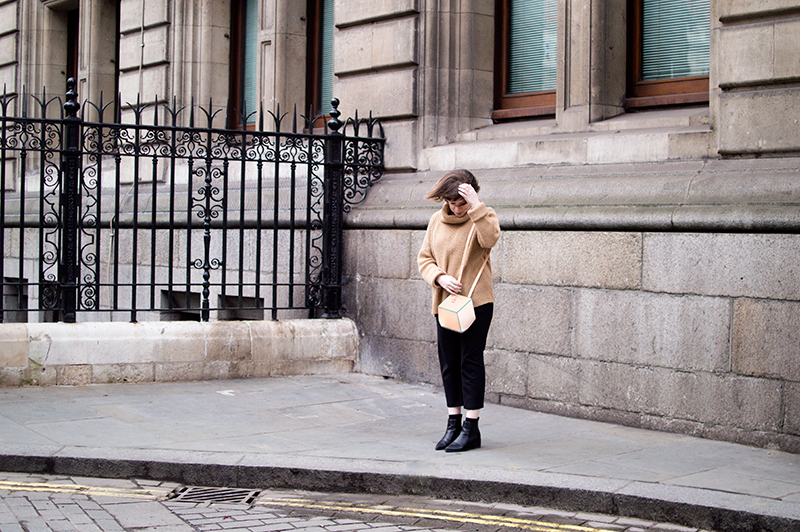 HEIO! It sounds like something a group of youthful jocks would shout in a sports bar. Actually it’s the name of an incredibly fashionable new bag brand. The more you know. Well on one particularly blustery London fashion week…day, I decided to take their Cube Turqueta for a wander. The cute, almost-origami style had me sold; as did the nude-neon lined colour way. Maybe others felt the same, as we got quite a few looks whilst shooting this look. Either that or they were confused by the tiny woman battling the wind, in nothing but a sweater and ankle swingers.

I’m still not quite sure how we managed to get these photos. I refused to give up though, as I was so in love with this cosy combo. Any time I get to wrap up in a cuddly sweater and call it fashion is ok by me. We were even snapped on our way back to The Apartment, so I must have been on to something!

Check out my previous style posts: OOTD
Thanks to V.A (Chopstickpanorama) for the photos of me. 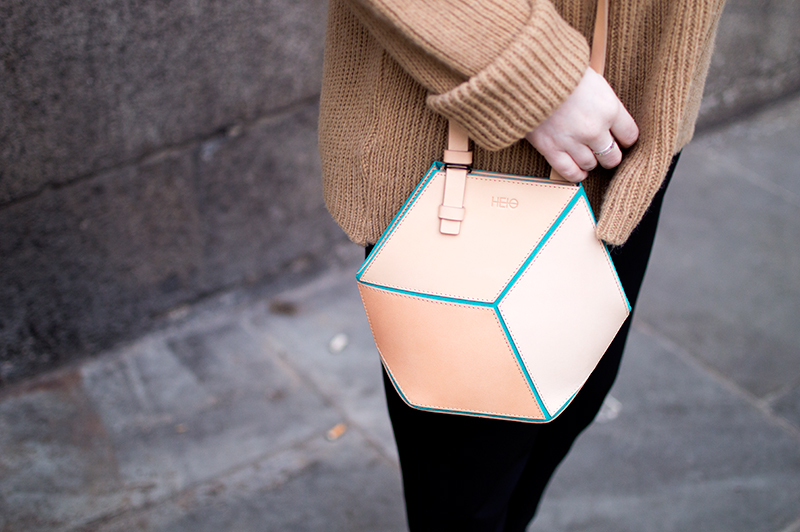 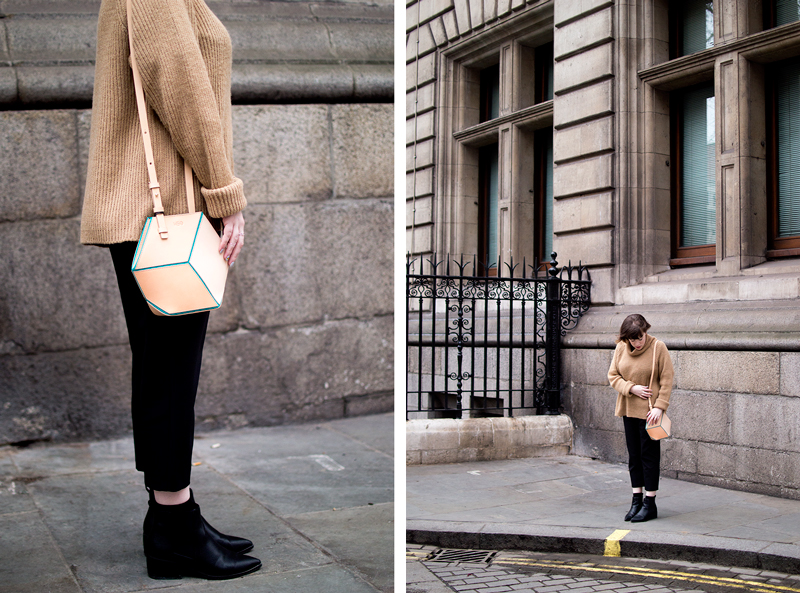 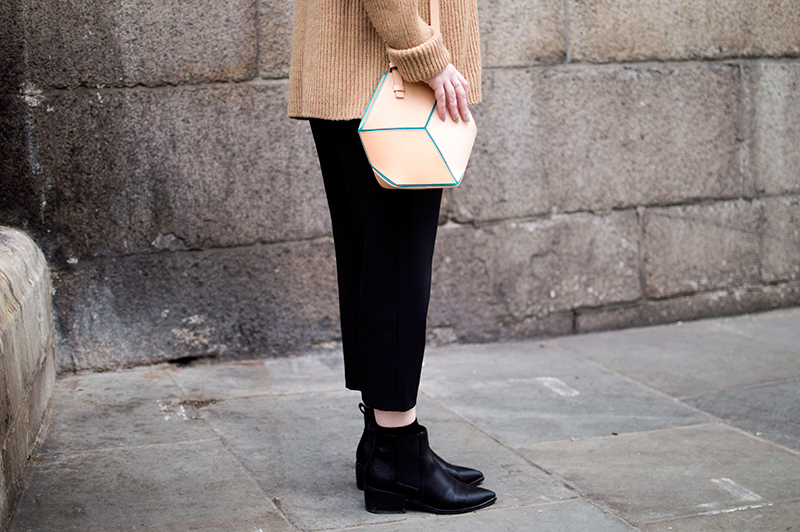 Shirts and blouses will forever remind me of high school. Whereas a lot of my friends preferred polo shirts, I chose a crisp white blouse. Truthfully I didn’t fully realise the potential of them at the time. Now my style is slightly more mature, and I appreciate them in a different way. There’s something quite sexy and chic about a well fitted shirt. I feel pretty powerful when I’m wearing one.

Some people may try to make you believe a shirt is only for school or business, but I beg to differ. Hawes and Curtis are one of London’s best stores for luxury shirts, if only for their choice of styles and fits. I chose this one in particular because polka dots will always be a favourite of mine, and I happen to think they look quite smart too. I paired my shirt with some well fitted jeans from Topshop and my court shoes from Urban Outfitters. I went for gold detailing with my accessories, matching them to my heels. Admittedly I did add the clutch bag as it looked similar to a file, playing around with the ‘business’ idea – making it more casual and wearable.

Finchittida Finch @ Luna & Curious
Last weekend I had to make a stop to see my favourite design-duo Finchittida Finch. You may remember that I interned for them last year and I am so proud to continue following them as they go from strength to strength. Their collections are now available to buy on ASOS and in selected Urban Outfitters stores. How awesome is that? It just goes to show that a little bit (ok, a lot) of hard work, goes a long way! So when I heard they had a pop-up just down the road from me you know I was gonna be there asap! Unfortunately I caught a nasty cold so I missed the party and free nail art (you know I’m sick if I miss out on nail art), but I did make it down for their final day.
The Empress Collection is Finchittida’s latest collection, and in my opinion, the best to date. I didn’t think I could love their pieces anymore but the ornate crowns, the avant garde glasses, and the subtle pops of colour have won me over. My favourite piece from the collection is the chain mail skirt. You can see the effort that has gone into making this such a gorgeous and intricate piece. However I know I’m not going to be sporting it down to the shops anytime soon, so for a more practical choice I’d choose any of the necklaces, especially the large gold ones. As you can see I visited with some friends (Alex, Federica & Honey), and we all picked some pieces to model. If I’d had longer I would have dressed up in everything…yes that means the chain mail too! Still, for now I’ll just live vicariously through Li-Ann Smal (the face of Finchittida Finch’s Empress Collection) – you can check out all of the jaw droppingly gorgeous photos in the Empress Collection Lookbook. I’d also suggest watching the beautiful behind-the-scenes film shot alongside the new lookbook.
You can shop the new collection at Finchittida Finch.

I realise the blog has been lacking in OOTD posts recently.
That’s mainly down to me being lazy poor time management on my part.
I tend to get ready and then head out of the house, and forget to take a photo whilst I’m out.
I’m trying to change as I love doing OOTD posts – yes, I enjoy dressing up and pouting in front of a camera.
Really I need to make more time, but when I’m rushing about there’s always the next best thing.

I have taken to Instagraming a few photos here and there, when I’ve had the time. I’m not a big fan of putting OOTD shots on there as I don’t think you see much detail – I prefer to take shots of particular items on my Instagram, but I’ve had a change of heart recently. So I’ve been having fun taking shots of what I’ve been wearing, in front of my mirror etc.

S/S 2013 Trend – Shine
It’s a trend post – long time no see!
As London Fashion Week started yesterday it only seemed natural.
I feel like doing more trend posts lately, so I thought I’d start with one of my faves.
The catwalk saw models shine as they went down the runway this season.
Thankfully that’s going to translate to the high street too, so we can all stand out!
That means we’re going to see lots of iridescent & holographic fabrics, as well as foils, glitter & precious-metals.
This trend hasn’t made as big a splash on the high street as I had hoped, but it’s there!
It can be worked into most styles and whether you go all out, or add accents, you’ll shine.
My favourite example on the high street has to be H&M’s Iridescent High Tops, which I had been lusting after for a good month or more. They hit stores and went into the New Year Sale – lucky for those who knew that they would be perfect for one of this season’s big trends. I managed to grab mine for only £5 – I’ll be rocking them soon!
Designers such as Vivienne Westwood, Lanvin, Alexander Wang and Versace paved the way.
If you want to recreate the trend on the high street stores such as ASOS, Urban Outfitters, H&M are representing.

I love my Sweaters, you all know that by now.
So please welcome the latest edition to my collection.
No it’s not a gawdy tourist sweater – although those can be classy when rocked by the right person.
It’s actually the latest item sent to me by Oasap. I picked it because it looked cozy, and reminded me of my ‘Céline’ tee.
Obviously that’s the point of this particular design, and I kind of love it for that…and because it’s so comfy.
I’ve been trying to add little pops of colour to my outfits, just here and there.
It’s difficult some days as I have to be up early, and snow + early mornings = lazy Emma.
I have been trying for a while to get out of the habit of black on black, so I don’t think I’ve done too bad here.
At least the sweater is grey, and hey! check out those burgundy tights.
At least I tried.
Don’t forget to visit Oasap and use discount code: ‘bloomzy’ for 35% off!