Three fabulously feisty and strong females who also happen to have amazing personal styles.
My own person style is a variety of looks, and I think this inspiration post shows that.
I don’t want to write much as I think the photos speak for themselves, but these lovely ladies have all been inspiring my own personal ‘street style’ recently and I think you may see that reflected in future OOTD posts.
Source; 1, 2 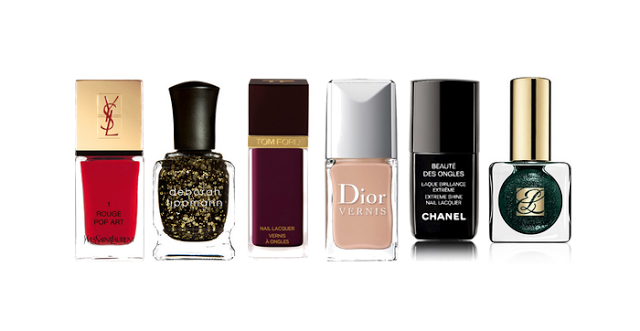 Most nail polish addicts will have a favourite designer brand. However most of these brands are expensive, even if the quality is good. So what if someone told you, you could have designer nail polishes but without the price tag? Well that’s exactly what US brand Lacquerous are planning to offer.

The concept behind the brand is simple; You pay $18 a month and they send you 3 designer nail polishes (of your choice). The catch? You’re only renting them. Yep, at the end of the month you send the polishes back. You then pay another $18 and are sent another 3 polishes, and so on. They’re the “Netflix for Nail Polish”.

This all sounds great, especially if you don’t use a polish more than once a week, and switch often. However the small print is where it starts to sound a little less likeable – you can only use each polish up to 3 times. Now for me, that’s a big no no. If I was going to pay £12 a month (the equivalent to $18) for 3 polishes a month I would want to get my moneys worth, designer or not. Sure most people probably won’t even use them more than 3 times, but what if you happen to dislike the other colours you choose, or you really fall for one or two in particular?

At the moment the company is invite-only to American citizens, with no talk of taking the venture overseas. They say they have over 2,500 people on their waiting list, however when you think about the size of America…well that’s not much at all, is it? I guess only time will tell as to how popular the idea and company will be.

Would you rent a nail polish? What do you think of the idea behind Lacquerous?

The byBiehl launch event at Aurum Jewellers, Norwich
Last week I popped by Aurum Jewellers to take a look at the new byBiehl line.
Boasting a simple and stylish range of leather bracelets, necklaces earrings, rings and intricately design pods.
Much like a charm bracelet you choose the pods that appeal to your style/the moment and accessorise your necklace or bracelet. Matching earrings and rings make sure you can go all out with this gorgeous line.
The concept behind byBiehl is so simple, yet incredibly unique.
The idea of accessorising a leather bracelet with these pods really appeals to me.
I’m not a fan of ‘conventional’ charm bracelets but these suit my style perfectly, and logically they should fit anyone’s – it’s all about customising the item and making it yours. I instantly fell in love with the Buddha and Ying Yang pods, as well as the simple black & gold leather bracelet. They will definitely be on my Christmas Wishlist!
Aurum is a well known and loved independent jewellers in Norwich.
Selling contemporary designer jewellery, the items they carry are unique, classic and stylish.
With over 35 years experience, the family run jewellers is a firm favourite within Norwich Lanes.
You can buy the Danish brand in-store, which is exclusive to Aurum (in Norwich).
You can also buy it online here – use code: silvergenius for 5% of all online orders (until 21 Oct).

I think this is probably the first time I’ve been seen in a coat on OOTD?!
Well unfortunately the weather has called for it in the last few days – Autumn is here already!
That’s ok though as there are some fabulous coats, jackets and cardigans out this season and I love layering.
I guess when I put this outfit together I wasn’t too sure what the weather would be like.
Shorts & tight combos are a saviour in A/W though so I knew I couldn’t lose by choosing them.
Lately I’ve fallen for simple outfits with one main point of focus – for me that’s this belt.
I also like the idea of investing in a few key items, which you can work into various looks.
I definitely think I’ll be doing that with this belt as it’s so versatile, and screams out ‘fashion!’ to me.
I’m hoping this post will mark the re-posting of my OOTD posts.
I kind of paused for a little while, for no reason in particular – oh well!

A preview of my Shopcade page
Shopcade is a new way to keep track of the things you love and the items you want to buy.
As you all know I am a wishlist addict. I love compiling them and sharing them with everyone else.
So it’s only natural for me that Shopcade is a site that is not only fun but essential for me when I’m online.
Shopcade is a social shopping application that allows you to share the items you’re buying or just want to buy.
You have your own personal page where you can add products and lists of items to show off to your friends and the Shopcade community. If you have ever seen a photo of an item online and wondered where it’s from and how you can buy it – Shopcade is your saviour! You can click through the product and be taken directly to the brands page where you can buy the item and earn points (& cash!) on Shopcade. You can also just earn points by adding products to your page. Once you have a certain amount you can use your points to get free gifts or vouchers. I used my points to get myself some new business cards and I’m currently saving the rest for a big prize!
I personally was drawn to Shopcade through the product sharing/list creating, and by the idea that you can then buy the item you just re-blogged/pinned. Earning points and cash whilst doing this is just an extra perk for me really.
I also don’t feel any pressure to buy items – I can just enjoy sharing products and making my page pretty.
Add me on Shopcade here, and check out my Shopcade feature here.
Please ignore the name, it’s old and is in the process of being changed.

Rock the Baroque by bloomzy

Wow, now that’s an intimidating image, isn’t it?
Don’t worry, I’m not here to tell you that the latest trend is to wear everything in one print and clash as much as possible.
I am going to write about one of A/W 2012’s latest trends though, and it’s one of my favourites.

Baroque certainly isn’t anything new, in fact that’s the point; inspired by the Rococo movement, the Baroque trend is all about decadence and opulence. Designers such as Dolce & Gabanna, Versace, Givenchy and Balmain have inspired the high street to join in on the fun – in fact, everyone wants in on the Baroque trend.

When done right, Baroque can make a high street outfit look like it’s just come off the catwalk.
When it’s done wrong, well…let’s not try to think about that.

This is a trend that is going to be super easy to find on the high street.
River Island are paying homage to the trend amazingly, whilst stores such as ASOS, H&M,
M&S and Topshop are also doing pretty good jobs.

Good luck and have fun!

Would you like to see more UK trend posts in the future?
Leave a comment, and let me know.

(T-shirt, Shorts & Sandals: Topshop, Bag: Primark, Necklace: Marc by Marc Jacobs, Sunglasses: New Look)
Here is the second helping of my outfit shots from my recent holiday.
This time taken in a wonderful small village in the mountains, outside a lovely restaurant we actually ended up going to a few days later. I loved the look of the place so I wanted to do a quick outfit shot in front of it.
Obviously this was a casual outfit, just something comfortable for a day of walking, browsing markets and sipping on decafe espressos. I wore my favourite grey t-shirt…ok I only have one, but if I did have more this would be my favourite because the material is wonderfully comfortable, soft and light. I also paired it with my Marc by Marc Jacobs wishbone necklace, which is just the right amount of ‘rock’ without taking too much from the outfit.
I look so teeny-tiny on these photos, and as much as I would like to think it’s a combination of the slope I’m standing on and the fiance’s height, lets just face it, I’m a shorty.
Apologies for the quality of the above photos, these were taken on my iPhone not camera.