Eyelash Review
Around the beginning of the year I wouldn’t have worn eyelashes. I had tried in the past but they had all been too long and too big etc. But then the lovely Miss Mitsu encouraged me to keep trying, so I did.
I currently use medium priced lashes, which I then cut to size as most eyelashes in the UK are made far too long for my eyes. Therefore when I saw some MAC#7 impersonation lashes I decided to do a short review on two cheaper sets of lashes.

The reason I choose MAC#7 impersonation lashes is because of how popular they are. Not only with Gals, but in general. They’re always in trend because of their popularity and their natural glamourous look, which can also be used for a dramatic effect.
Therefore I choose Ardell’s take on the #7, ‘Demi Pixies’ and a cheap off-brand version found in a discount store. I have provided pictures of the lashes in their case, on – without make-up and on – with make-up.
First up, the off-brand discount store lashes;

Cost: £1/$1.45
The first thing I noticed about these were that they looked extremely plasticy, maybe something you would use as a very cheap accompaniment to fancy dress. The individual lashes are quite thin and these aren’t made from human hair – it didn’t say but I’m guessing latex!?
I had to cut these into accent lashes, as they were too long for my eye.

It was quite difficult to get these on. The band was very rigid and had hardly any give, so they didn’t bend very well when I tried to apply them. When I put them on they didn’t blend well at all with my natural lashes. They did have a very dramatic look though.

Once I had applied a quick coat of make-up the lashes blended slightly better, but they still felt very fake – ok that probably sounds weird, because yes they are fake, but they looked fake and felt very unnatural compared to other false lashes I have used.
In person they looked better with make-up on, and I would probably wear these if I was going to do some dramatic make-up that overshadowed them slightly, making them not as noticeable. If you want a pair of lashes for fancy dress or you have run out of money then these are probably the alternative for you.
Next up, Ardell’s ‘Demi Pixies’;

Cost: £5/$7.23
I first heard about Ardell through the gorgeous Monica, who did a great review on them. But my girl Alanna was the one who really convinced me – I just know she’s gonna show me up when she wears them, with her amazing make-up skills ;D
These were also too long for my eyes (I swear I don’t have teeny-tiny eyes), so I cut these again. This is one of the main reasons I won’t use real MAC#7’s, as I am too scared to cut up something that is so much better/a bit pricier. 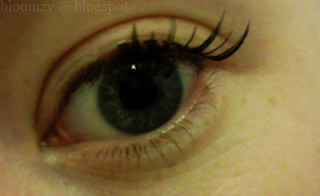 These lashes were much easier to apply. The band was flexible, although a little bit more rigid than other lashes I have used. But I shall forgive them for that, as the quality is very good. They are very similar to the #7 and they are made from 100% human hair – no plastic rubbish. They were also much thicker than the other pair.
They blended much better with my natural lashes than the discount store ones, and they felt natural too. I would consider wearing these with not much make-up at all.

However, I did apply some make-up so you guys could see what they were like.
The photo may not be great quality, or do them justice but they looked great. They blended completely and even though they were a little longer than I would usually wear, I have to admit that I liked the thickness.
Ultimately the thickness, quality and feel of these makes them far superior to the discount store brand, which I expected. They were 5x the price, but even so I would say that this is still cheaper than what I would expect to pay for a good pair of lashes. I would definitely buy some of the other lashes they offer in their range, as the quality and natural look has me hooked.

(Your)Left; Ardell
Right; Discount store brand
And to finish this post off, a silly picture of me wearing both the lashes. Haha the wide-eyed stare is so you can check the lashes out properly. I hope I don’t cause any nightmares as a consequence ;D
Would you wear either of these?
Do you prefer quality or quantity?
NOTE: I was rather rushed when applying these/doing my make-up, so with a little more time and effort they could look even better.

A surprise treat from my sister, all the way from

What do I eat in 35c weather in London? Tacos, of