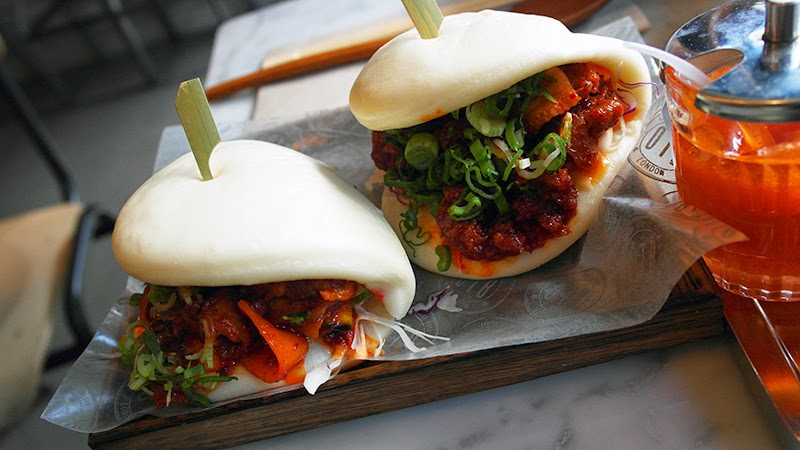 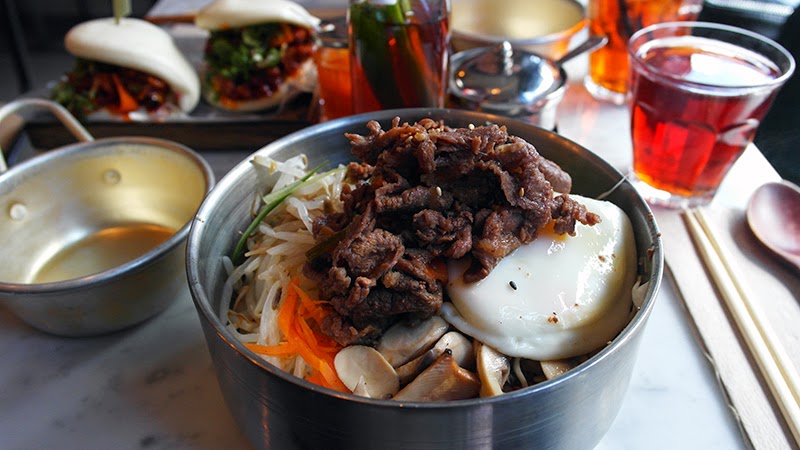 Onthebab is a lone Korean restaurant in the heart of Shoreditch. I headed there around 12pm on a Tuesday with V.A of Chopstickpanorama.

Onthebab is a tiny restaurant located on Old Street, yet they’ve managed to fit in as many tables (and a bar) as possible, without it feeling uncomfortable. The interior matches the exterior, making sure the minimal chic feel of the restaurant stays in touch with it’s Shoreditch roots. We were greeted by a very welcoming waitress, and an empty restaurant. I gave a sigh of relief that we had made it before the lunchtime rush. We had a hard time choosing which dishes to have, not because there were too many, but because they all sounded delicious. We finally decided on the Spicy Pork Buns (to share) and a Bulgogi Bibimbap (each). I started my meal with a refreshing Cinnamon Punch – a Korean soft drink that I don’t see often. I was a little worried when the pork buns arrived, with their almost glowing red innards. No matter how much I try, my tolerance for spice is extremely low. They were spicy, but just under my barrier, and boy were they delicious. The flavour inside one of those tiny little buns is immense! I imagine this was partly due to the cut of pork and the way it had been cooked to perfection. I found myself fearful at the impending last bite. Unfortunately it came, but I was eager to try my Bulgogi Bibimbap so I recovered pretty quickly. Bibimbap is a traditional Korean rice dish with vegetables and gochujang (chilli pepper paste), usually served with a fried egg and meat. Well at Onthebab you get the whole shebang! We chose the bulgogi beef as it’s a favourite of ours. The dish was large and came with plenty of meat, egg, fresh vegetables and rice. It didn’t taste spicy, so I added a little more gochujang to mine, and I thoroughly enjoyed it. Towards the end of our meals the lunchtime rush had hit and the restaurant was almost full. Still, the service was fast and impeccable. I left satisfied, and impressed with the food and the lovely people running the establishment.

It’s not often that I crave a particular dish, but I can honestly say that I will be back to Onthebab for the Spicy Pork Buns alone . Of course I’d also love to try out more of their delicious dishes too. This is one restaurant you can not overlook!

You can read more of my restaurant reviews on Zomato.

This week we tried our hand at recreating the @dft

I decided that a weekly takeaway from some of my f